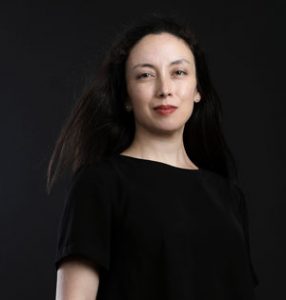 Recognized in 2018 by the League of American Orchestras for her “experience, talent,leadership potential, and commitment to a career in service to American orchestras”, CanadianConductor, Nadège Foofat, is a frequent guest of symphonic orchestras and new musicensembles across Canada and the United States.

With a background as a violinist and violist, and with performance degrees from the JuilliardSchool and Yale School of Music, Nadège received a diploma in contemporary orchestralconducting from the Conservatorio della Svizzera in Lugano, Switzerland, and a doctorate inorchestral conducting from the Université de Montréal.

As former Assistant Conductor to Kent Nagano at the Hamburg State Opera and PhilharmonicOrchestra in Germany, she assisted in historical productions of Wozzeck, Lulu, Walküre,Madama Butterfly, Zauberflöte, and Stilles Meer, and new productions of Fidelio and Parsifal,as well Hamburg Philharmonic Orchestra concerts at the Elbphilharmonie, with Hamburg’s St.Michaelis Choir, and the International Musikfest Hamburg.

In 2014, Nadège served as Associate Conductor for the Naxos recording of Darius Milhaud’sL’Orestie d’Eschyle, which was nominated for a 2015 GRAMMY® Award (Best OperaRecording).

From 2009-2014, Nadège was the Founder and Music Director of the Esopus ChamberOrchestra, a twenty-five-member award-winning professional chamber orchestra based in theHudson Valley, New York. Elizabeth and Marcel are Artistic Directors of White Rock Concerts and are on faculty at the Langley Community Music School. Elizabeth is also Artistic Director of Concerts at LCMS and Marcel is currently composer in residence. The duo has been on faculty at Mount Royal University and University of Calgary as well as being involved in various musical projects at The Banff Centre for the Arts. For several years, Marcel held a position as Professor of Music at
Mohawk College in Hamilton.

As an Associate Composer of the Canadian Music Centre, Marcel’s broad range of musical interest and experience in both, classical and popular music has led to an output of arrangements and compositions in a variety of styles and genres. He has been commissioned by the CBC, the Land’s End Chamber Ensemble, the Spiritus Chamber Choir, the Langley Community Music School, the VSO School of Music, and the San Francisco International Music Festival.
Recent performances include his Requiem for a Lost Girl, which was part of Vancouver Opera’s 2018 Festival. In 2019, the Bergmann Duo and Vancouver’s Turning Point Ensemble gave the premiere of a new chamber version of the concerto for two pianos.

The duo studied with Arie Vardi at the Hochschule für Musik und Theater, Hannover and with Jean-Eudes Vaillancourt at the Université de Montréal. They received first prize at the International Chamber Music Competition in Caltanissetta, Italy, and were laureates of The 4th Murray Dranoff International Two Piano Competition. They performed extensively in Germany as members of the young artists’ roster of Yehudi Menuhin-Live Music Now.

Their distinctive and extensive repertoire ranges from the baroque to the contemporary and includes numerous own arrangements and compositions.

Gioachino Antonio Rossini, (29 February 1792 – 13 November 1868) was an Italian composer who gained fame for his 39 operas, although he also wrote many songs, some chamber music and piano pieces, and some sacred music. He set new standards for both comic and serious opera before retiring from large-scale composition while still in his thirties, at the height of his popularity.

Born in Pesaro to parents who were both musicians (his father a trumpeter, his mother a singer), Rossini began to compose by the age of 12 and was educated at music school in Bologna. His first opera was performed in Venice in 1810 when he was 18 years old. In 1815 he was engaged to write operas and manage theatres in Naples. In the period 1810–1823 he wrote 34 operas for the Italian stage that were performed in Venice, Milan, Ferrara, Naples and elsewhere; this productivity necessitated an almost formulaic approach for some components (such as overtures) and a certain amount of self-borrowing. During this period he produced his most popular works, including the comic operas L’italiana in Algeri, Il barbiere di Siviglia (known in English as The Barber of Seville) and La Cenerentola, which brought to a peak the opera buffa tradition he inherited from masters such as Domenico Cimarosa and Giovanni Paisiello. He also composed opera seria works such as Otello, Tancredi and Semiramide. All of these attracted admiration for their innovation in melody, harmonic and instrumental colour, and dramatic form. In 1824 he was contracted by the Opéra in Paris, for which he produced an opera to celebrate the coronation of Charles X, Il viaggio a Reims (later cannibalised for his first opera in French, Le comte Ory), revisions of two of his Italian operas, Le siège de Corinthe and Moïse, and in 1829 his last opera, Guillaume Tell.

Rossini’s withdrawal from opera for the last 40 years of his life has never been fully explained; contributary factors may have been ill-health, the wealth his success had brought him, and the rise of spectacular grand opera under composers such as Giacomo Meyerbeer. From the early 1830s to 1855, when he left Paris and was based in Bologna, Rossini wrote relatively little. On his return to Paris in 1855 he became renowned for his musical salons on Saturdays, regularly attended by musicians and the artistic and fashionable circles of Paris, for which he wrote the entertaining pieces Péchés de vieillesse. Guests included Franz Liszt, Anton Rubinstein, Giuseppe Verdi, Meyerbeer and Joseph Joachim. Rossini’s last major composition was his Petite messe solennelle (1863). He died in Paris in 1868.

Overture to Semiramide
by Gioachino Rossini

Semiramide (Italian pronunciation: [semiˈraːmide]) is an opera in two acts by Gioachino Rossini. The libretto by Gaetano Rossi is based on Voltaire’s tragedy Semiramis, which in turn was based on the legend of Semiramis of Assyria. The opera was first performed at La Fenice in Venice on 3 February 1823.

Semiramide was Rossini’s final Italian opera and according to Richard Osborne, “could well be dubbed Tancredi Revisited”. As in Tancredi, Rossi’s libretto was based on a Voltaire tragedy. The music took the form of a return to vocal traditions of Rossini’s youth, and was a melodrama in which he “recreated the baroque tradition of decorative singing with unparalleled skill”. The ensemble-scenes (particularly the duos between Arsace and Semiramide) and choruses are of a high order, as is the orchestral writing, which makes full use of a large pit.

After this splendid work, one of his finest in the genre, Rossini turned his back on Italy and moved to Paris. Apart from Il viaggio a Reims, which is still in Italian, his last operas were either original compositions in French or extensively reworked adaptations into French of earlier Italian operas.

Musicologist Rodolfo Celletti sums up the importance of Semiramide by stating that it “was the last opera of the great Baroque tradition: the most beautiful, the most imaginative, possibly the most complete; but also, irremediably, the last.”

Antonín Leopold Dvořák (8 September 1841 – 1 May 1904) was a Czech composer, one of the first to achieve worldwide recognition. Following the Romantic-era nationalist example of his predecessor Bedřich Smetana, Dvořák frequently employed rhythms and other aspects of the folk music of Moravia and his native Bohemia. Dvořák’s own style has been described as “the fullest recreation of a national idiom with that of the symphonic tradition, absorbing folk influences and finding effective ways of using them”.

Dvořák displayed his musical gifts at an early age, being an apt violin student from age six. The first public performances of his works were in Prague in 1872 and, with special success, in 1873, when he was aged 31. Seeking recognition beyond the Prague area, he submitted a score of his First Symphony to a prize competition in Germany, but did not win, and the unreturned manuscript was lost until rediscovered many decades later. In 1874 he made a submission to the Austrian State Prize for Composition, including scores of two further symphonies and other works. Although Dvořák was not aware of it, Johannes Brahms was the leading member of the jury and was highly impressed. The prize was awarded to Dvořák in 1874 and again in 1876 and in 1877, when Brahms and the prominent critic Eduard Hanslick, also a member of the jury, made themselves known to him. Brahms recommended Dvořák to his publisher, Simrock, who soon afterward commissioned what became the Slavonic Dances, Op. 46. These were highly praised by the Berlin music critic Louis Ehlert in 1878, the sheet music (of the original piano 4-hands version) had excellent sales, and Dvořák’s international reputation was launched at last.

The Symphony No. 9 in E minor, “From the New World”, Op. 95, B. 178, popularly known as the New World Symphony, was composed by Antonín Dvořák in 1893 while he was the director of the National Conservatory of Music of America from 1892 to 1895. It is by far his most popular symphony, and one of the most popular of all symphonies. In older literature and recordings, this symphony was – as for its first publication – numbered as Symphony No. 5. Astronaut Neil Armstrong took a tape recording of the New World Symphony along during the Apollo 11 mission, the first Moon landing, in 1969. The symphony was completed in the building that now houses the Bily Clocks Museum.

The symphony was commissioned by the New York Philharmonic, and premiered on 16 December 1893, at Carnegie Hall conducted by Anton Seidl. A day earlier, in an article published in the New York Herald on 15 December 1893, Dvořák further explained how Native American music influenced his symphony:

“I have not actually used any of the [Native American] melodies. I have simply written original themes embodying the peculiarities of the Indian music, and, using these themes as subjects, have developed them with all the resources of modern rhythms, counterpoint, and orchestral colour.”