An exquisite program of novelties and unusual combinations, crowned by Debussy’s unique, subtle and enchanting Sonata.

Nathan DAUGHTREY  An Extraordinary Correspondence, for flute and marimba

Nathan DAUGHTREY  Labyrinth of Light, for harp and marimba

This Concert  is offered as
Live-Streaming  & In-Theatre. 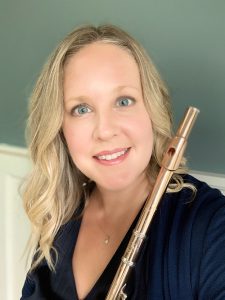 Emily Nagelbach is proud to hold the position of 2nd flute/piccolo with the Vancouver Island Symphony since 2006.  She is also principal flute with the Palm Court Orchestra and Head of the Winds & Brass Department at the Victoria Conservatory of Music.   As a freelance musician, she has performed with a variety of regional ensembles, including the Vancouver Symphony Orchestra, Victoria Symphony Orchestra and Pacific Opera Victoria. Emily holds an AVCM from the Royal Conservatory of Music, a B.Mus. in Performance and Theory from Wilfrid Laurier University, and a M.Mus. in Performance from the University of British Columbia, studying with Dr. Amy Hamilton, Lorna McGhee, and Camille Churchfield.  Prior to entering university, Emily studied with her friend and mentor, Dr. Mary Byrne.  As a soloist and chamber musician, Emily has won numerous competitions, including the Vancouver Friends of Chamber Music Competition and the Kitchener-Waterloo Chamber Orchestra Concerto Competition.  Emily has been broadcast on CBC Radio as guest principal flute with the Victoria Symphony Orchestra and has recorded for the Canadian Music Centre.  She is also a member of the Continuum Consort with which she toured South Korea and performs regularly on the West Coast of BC. 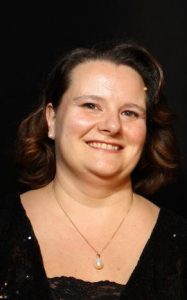 Guyonne Le Louarn began to study violin at the Rennes’ CNR in France. She moved to Nantes at 16 to switch to viola in 1992 and went on to study chamber music, theory and history of music, orchestral work and conducting in Nantes and simultaneously at CSParis earning multiple gold medals in all disciplines. Meanwhile she earned a degree in Early Music in Nantes. In 1998, she won the Paris Interschool competition summa cum laude and was a finalist at the National Viola Competition in Epernay in 1999. In 2000, Guyonne moved to Toulouse in the CEMS’ soloist program, receiving the “Aida foundation scholarship for Young Musicians”. She was also principal viola of the CEMS’s chamber orchestra performing extensively in Europe and as far as Oman.  In 2001, Guyonne moved to Victoria, BC where she received an AVCM diploma in viola and violin and a specialization in chamber music coaching at the VCM. Guyonne won numerous GVPAF awards and represented Victoria at the Provincial Festival in 2003.  She now holds multiple teaching positions in violin, viola and chamber music. She is the assistant principal viola of the VIS and is a freelance chamber musician and recitalist. She is the director and managing partner of Maggie Music LLP and the artistic director of the summer academy “Violins at the Val”, in northern Brittany, France. Additionally, she volunteers as head of the GVPAF Strings section.

Lani is a member of the acclaimed, Winter Harp and in 2019 added the role of their Assistant Producer. Lani’s collaboration with Erhu player, Rong Jun and composer, Jin Zhang has been showcased in many events; most notably, the Sound of Dragon Festival and the 2011 World Harp Congress. Lani is heard on the soundtracks for Space Buddies, Super Buddies, the Canadian attraction Fly over Canada and on singer Appollonia Vanova’s CD, Lullabies.

Lani is a harp instructor at the Vancouver Symphony School of Music and is currently Secretary of the WCHS/BC Chapter of the American Harp Society. In 2016 she added ‘Mom’ to her list of titles and is excitedly joining her little boy on his own musical journey! 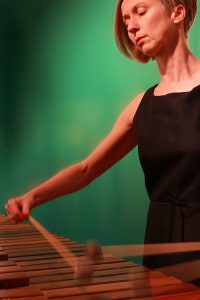 Nicole Arendt is a timpanist, percussionist, composer, improviser, and teacher. She has been Principal Timpanist with the Vancouver Island Symphony for 14 seasons. An alumnus of the National Youth Orchestra of Canada, she has played percussion and timpani with the Edmonton, Victoria, Okanagan, Kamloops, and Prince George symphonies and Baroque timpani with Early Music Vancouver. As a marimbist, she has performed with Music on Main All Stars, Music by the Sea, and in a variety of recitals and concertos.  She holds a Masters of Music degree from the University of Victoria and a Bachelor of Music (Honours) from the University of Alberta. Nicole is a founding member of Brave New Band, an exciting new project that features music written and performed by her and her saxophonist husband, Chris Helman. Nicole’s passion for Iyengar yoga led her to complete the rigorous process of teacher training, and in 2018 she became a certified Iyengar yoga teacher.

In 1976, after a serious road accident, during which he lost his right arm (which he was successfully transplanted without being able to regain his motor skills), he had to put an end to his career as a concert performer. He then devoted himself to teaching the organ, as well as composition, with among other things “Instants éclatés” in 1983 for the Orchestre national du Capitole de Toulouse.

He was appointed director of the Conservatoire de Paris in 1991.

He died prematurely of cancer in 1992, leaving unfinished an opera adapted from Oscar Wilde’s the Picture of Dorian Gray.

Darasse listened to the organ in a new way. He favored the breath (continuous or interrupted), the articulated discourse (the importance of touch and digital articulation), and registers and colours (the heritage of his professor of musical analysis, Olivier Messiaen).

During his short career, Darasse was one of the most eclectic organists of his generation, sensitive as much to early music, whose mysteries he knew, as to contemporary organ music, of which he was one of the great promoters. He recorded on the organ of the Robert Boisseau organ of the Église Notre-Dame de Royan [fr] one of the first disks of “contemporary” organ music in the very late 1960s (works by Luis de Pablo and himself). Very close to Antoine Tisné and Iannis Xenakis, he premiered in Germany and France the only work of the latter for organ: Gmeeoorh (1974).

(Achille) Claude Debussy (22 August 1862 – 25 March 1918) was a French composer. He is sometimes seen as the first Impressionist composer, although he vigorously rejected the term. He was among the most influential composers of the late 19th and early 20th centuries.

Born to a family of modest means and little cultural involvement, Debussy showed enough musical talent to be admitted at the age of ten to France’s leading music college, the Conservatoire de Paris. He originally studied the piano, but found his vocation in innovative composition, despite the disapproval of the Conservatoire’s conservative professors. He took many years to develop his mature style, and was nearly 40 when he achieved international fame in 1902 with the only opera he completed, Pelléas et Mélisande.

Debussy’s orchestral works include Prélude à l’après-midi d’un faune (1894), Nocturnes (1897–1899) and Images (1905–1912). His music was to a considerable extent a reaction against Wagner and the German musical tradition. He regarded the classical symphony as obsolete and sought an alternative in his “symphonic sketches”, La mer (1903–1905). His piano works include two books of Préludes and one of Études. Throughout his career he wrote mélodies based on a wide variety of poetry, including his own. He was greatly influenced by the Symbolist poetic movement of the later 19th century. A small number of works, including the early La Damoiselle élue and the late Le Martyre de saint Sébastien have important parts for chorus. In his final years, he focused on chamber music, completing three of six planned sonatas for different combinations of instruments.

With early influences including Russian and Far Eastern music, Debussy developed his own style of harmony and orchestral colouring, derided – and unsuccessfully resisted – by much of the musical establishment of the day. His works have strongly influenced a wide range of composers including Béla Bartók, Olivier Messiaen, George Benjamin, and the jazz pianist and composer Bill Evans. Debussy died from cancer at his home in Paris at the age of 55 after a composing career of a little more than 30 years.

Sonata for flute, viola and harp

The sonata for flute, viola, and harp, 137, was also written in 1915 in by  Claude Debussy, French musician.

The first performance of the Sonata took place in Boston, at Jordan Hall in the New England Conservatory, on November 7, 1916. The performers were members of a wind ensemble called the Longy Club, which had been founded by the principal oboist of the Boston Symphony Orchestra, George Longy. The first performance in France was a private one that occurred on December 10, 1916, at the home of Debussy’s publisher, Jacques Durand. The first public performance in France was thought to be at a charity concert on March 9, 1917. However, Thompson (1968) reported a performance of the sonata at London’s Aeolian Hall by Albert Fransella, Harry Waldo Warner and Miriam Timothy on 2 February 1917 as part of a concert otherwise given by the London String Quartet. A typical performance lasts between 17 and 18 minutes.

According to Léon Vallas (1929), Debussy initially planned this as a piece for flute, oboe and harp. He subsequently decided that the viola’s timbre would be a better combination for the flute than the oboe’s, so he changed the instrumentation to flute, viola and harp. The instrumentation would later become a standard ensemble instrumentation.

The work has three movements: